Infrastructure investors eye up Turkish model
New financing model offers potential solution to funding Asia's infrastructure needs
4 May 2017 | Nick Herbert
Closing the global infrastructure investment gap is a thorny problem. Estimates vary as to the size of the gap. But the numbers are enormous. Management consultant McKinsey & Co estimates that US$3.3 trillion of infrastructure investment is required annually to support global growth. Emerging economies will account for some 60% of that demand.
Developing Asia alone will need to invest more than US$1.7 trillion in infrastructure each year until 2030 to maintain its own growth momentum, tackle poverty, and respond to climate change, according to the Asian Development Bank report released in February. McKinsey concludes that if the current level of underinvestment continues, there will be a yearly shortfall of US$350 billion. But the size of that gap triples if you include the additional investment required to reach the United Nations’ sustainable development goals. That puts the total gap to more than US$1 trillion a year. 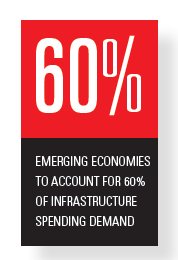 Yet government spending on infrastructure projects has been decreasing in most countries as public sector balance sheets have come under increasing strain. Likewise, a tighter regulatory environment has resulted in a drop-off in financing from the banking sector, the traditional source of private sector funding for infrastructure.
That said, the challenge has never been due to insufficient investment funds. There is supposedly over US$90 trillion waiting to be put to work by the likes of pension funds, insurance companies and asset managers. The solution to filling the infrastructure gap is to create an environment where asset managers feel comfortable in committing long-term capital into long-term infrastructure projects.
The obligation to nurture that environment falls into the lap of  policymakers and their conduits.
“The scale of the sustainable development challenge is huge,” says Andrew Davison, senior vice president at Moody’s Investor Services. “Technical assistance, risk mitigation and credit enhancements from the multilateral development banks (MDBs) will play an important role in facilitating investment in emerging market infrastructure by institutional investors.”
That sentiment is echoed within the MDBs. “There is a willingness within institutional investors to invest in emerging markets, but that willingness is not reflected in actuality,” says Thomas Maier, managing director for infrastructure at the European Bank for Reconstruction and Development (EBRD). “It is our task to understand the problems constraining investment and then to address those issues.” 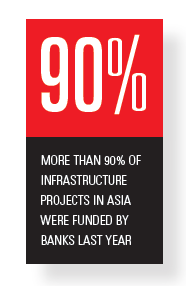