Between March 2020 and March 2021, the United States enacted three fiscal packages to stimulate the economy and support businesses and households following the economic shock caused by Covid-19. President Donald Trump signed the Coronavirus Aid, Relief, and Economic Security (CARES) Act on March 27 2020, and the Coronavirus Response and Relief Supplemental Appropriations Act on December 27, and these were followed by President Joe Biden’s American Rescue Plan on March 11 2021.

With each round of legislation, an “economic impact payment” (EIP) was paid out to people through direct deposit, a cheque, or with a special prepaid debit card, and in each case, the idea was that the funds would be spent on consumption to support aggregate demand and thereby stimulate the overall economy. The EIPs came in specific dollar amounts ranging from US$600 to US$1,400 for an individual and from US$1,200 to US$2,800 for married taxpayers up to a certain income threshold.

The rationale for these temporary payments was based on the Keynesian consumption function, according to which an increase in income increases spending and thereby boosts the economy. But alternative views, such as the permanent income hypothesis that Milton Friedman first articulated in the 1950s, hold that such increases in income lead to only small increases in consumption – if any at all – precisely because they are temporary.

The graph below shows the actual effects of the EIPs on disposable personal income (DPI) and on personal consumption expenditures (PCE) from January 2019 to April 2021, according to the latest data from the US Bureau of Economic Analysis. The three peaks in DPI are due to, and coincide with, the three EIPs, indicating that DPI increased sharply when an EIP was made, and then fell rapidly back to its original level when the payments ended. These were clearly temporary increases in income and were advertised as such. 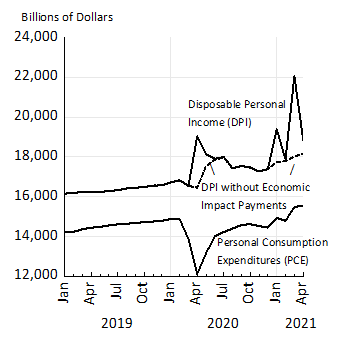 Now look at the PCE line: it shows no increase at the time of the three EIPs. The recovery of consumption tracks the path of the more permanent DPI without the payments (the dashed line). The additional “stimulus” had little to no impact on consumption in the months when there were huge increases in EIP-fueled DPI – April 2020, January 2021, and March 2021. The permanent income hypothesis predicts that a large amount of the temporary EIPs would be saved rather than spent on consumption and stimulating the economy, and that is precisely what appears to have happened.

This is not the first time that the US government has tried to stimulate the economy with temporary infusions of income. Like the EIPs of the past year, the one-time “rebate” payments in the Economic Stimulus Act of 2008 increased DPI but had no noticeable effect on consumption, and thus did little or nothing to stimulate aggregate demand or the economy. Again, a regression analysis shows that the impact of the rebates on consumption was statistically insignificant while that of the more permanent DPI excluding the rebates had a statistically significant effect.

Back in 2008, there was general agreement among economists that temporary payments would not work as a source of stimulus. Following that earlier experiment, many economists examined the policies and showed that they did indeed do nothing to stimulate the economy. These findings raised serious doubts about the use of temporary discretionary countercyclical fiscal policy in practice. John F. Cogan, Volker Wieland, and I laid out these problems in a 2009 Wall Street Journal commentary titled “The Stimulus Didn’t Work”.

Nonetheless, there was a dramatic revival of interest in precisely the same form of stimulus as soon as Covid-19 arrived. Rebate payments have returned with a vengeance. Although they now bear a new name, the pattern remains the same. Whether one uses revealing charts or formal regression techniques, the most up-to-date empirical evidence that we have confirms the view put forth a decade ago (or even decades ago): temporary stimulus programmes simply do not increase consumption or stimulate the overall economy.

John B. Taylor, Under Secretary of the US Treasury from 2001 to 2005, is Professor of Economics at Stanford University and a senior fellow at the Hoover Institution. He is the author of Global Financial Warriors and co-author (with George P. Shultz) of Choose Economic Freedom.